Skip to content
Home/Educators, Parents/Top 5 Trickiest Mathematics Questions From Around the World

Top 5 Trickiest Mathematics Questions From Around the World

Math(s) can be a tricky subject for many students. But some questions are trickier than others.

Put on your thinking caps because we searched the internet for the top 5 trickiest mathematics questions from all around the world.

Solutions are provided at the end of all the questions (but no peeking).

If you’re up for an extra challenge, we’ve even got a bonus question at the end.

In a since-deleted tweet, a mum from England tweeted this word problem in a test meant for kids aged 6 to 7 in 2016. It went viral and even some adults were having trouble figuring out the answer.

There were some people on a train.

19 people get off the train at the first stop.

17 people get on the train. 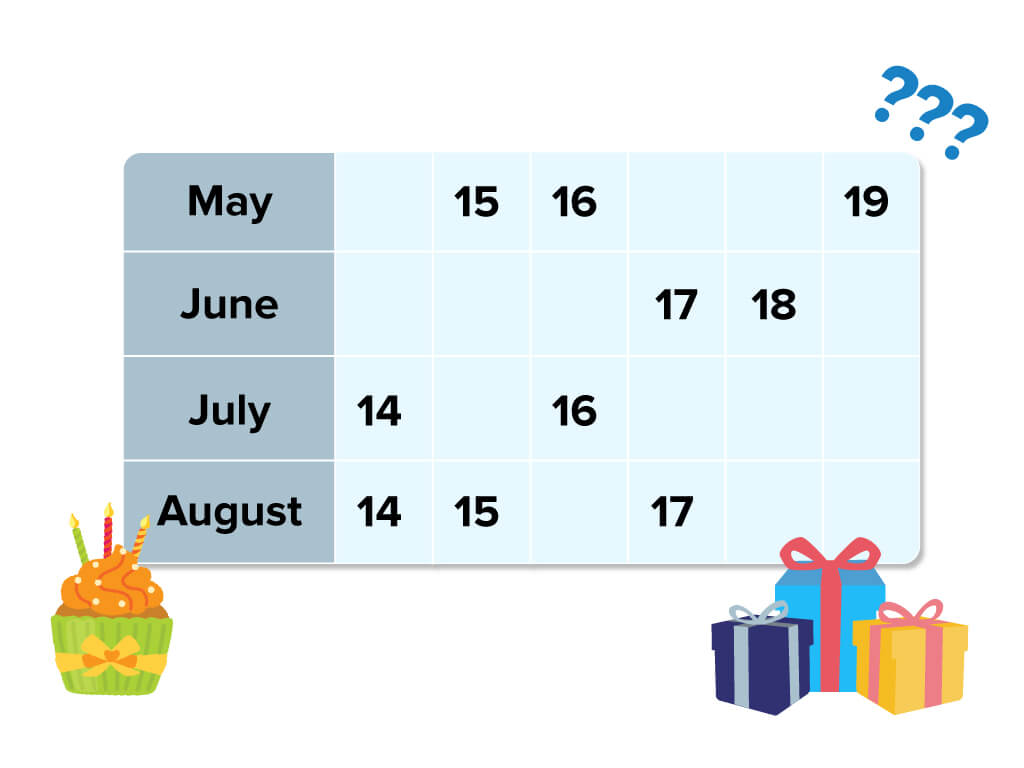 Problems that test logical reasoning are common in Math(s) Olympiads. But this question from the 2015 Singapore and Asian Schools Math Olympiad contest for students 14 to 15 years old got the whole world stumped.

Albert and Bernard just became friends with Cheryl, and they want to know when her birthday is.

Cheryl then tells Albert and Bernard separately the month and the day of her birthday respectively.

Albert: I don’t know when Cheryl’s birthday is, but I know that Bernard doesn’t know too.

Bernard: At first I don’t know when Cheryl’s birthday is, but I know now.

Albert: Then I also know when Cheryl’s birthday is.

So when is Cheryl’s birthday?

This question is not only tricky but might also take a while. According to VNEXPRESS, this puzzle is meant for third graders/year 3 students (8 year olds) in Vietnam! 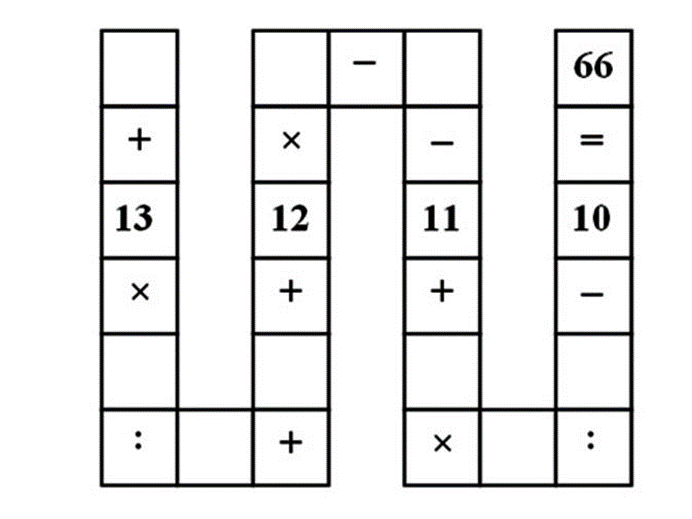 All you have to do is use the digit 1 to 9 once to fill in the boxes to make the entire equation equal to 66. The expression should be read from left to right.

Sounds easy? Not quite.

4. Remember Where You Parked Your Car 🚗

This problem has been around for a while but resurfaced on an elementary/primary school entrance exam in Hong Kong.

Apparently, six-year-olds were expected to know the answer in 20 seconds or less.

What is the car’s parking spot number? 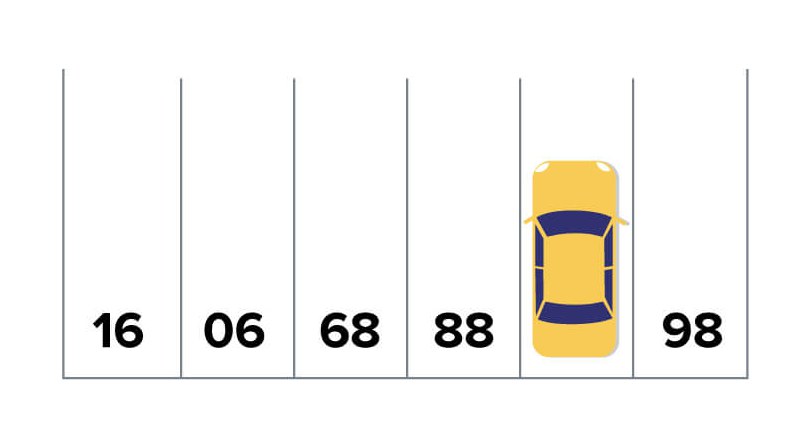 This question came from China and was used to identify gifted fifth grade/year 5 students (10 to 11 years old). It’s said that some of them were able to solve this question in less than one minute!

Find the area of the red triangle. The diagram is not to scale. 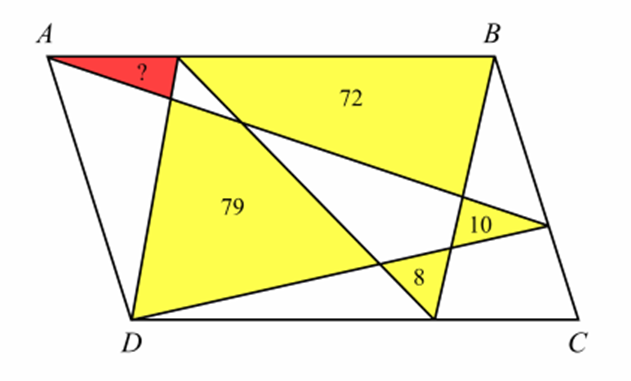 If you still have head space for one more, try this. 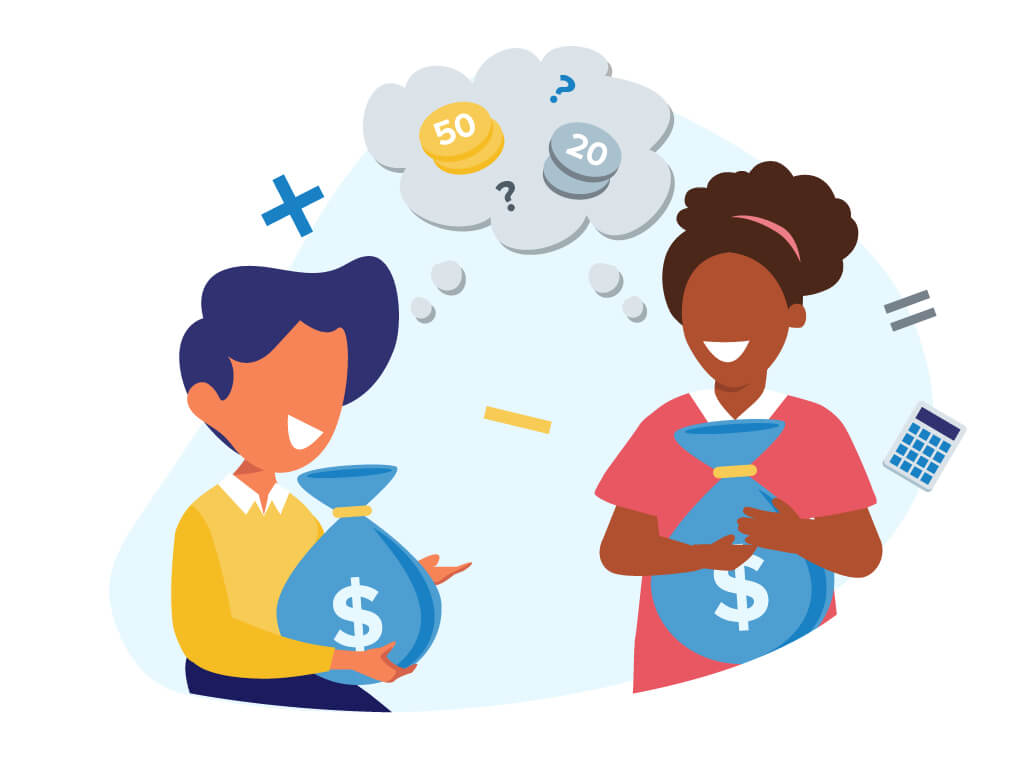 In 2021, a Primary School Leaving Exam mathematics question left some 12-year-old students in tears. Supposedly, this question was meant to be solved in a matter of minutes, as it is only allocated 4 marks in total.

Note: This two-part question could have been recalled from memory and rewritten by an adult, which could explain the grammatical errors.

Helen and Ivan had the same number of coins.

(a) Who has more money in coins and by how much?

Could You Solve These Tricky Mathematics Questions?

Or were you confused and stumped? Well, you’re not alone.

We had a really tough time understanding and solving them too.

If you’re a teacher and looking for problem and reasoning questions, consider a mathematics resource to sharpen your student’s logical thinking skills.

Mathletics has 700+ Problem-Solving and Reasoning questions to bring next-level mathematics thinking to your class.

Now let’s get to the answers…

Originally, the train had 2 more people.

So if there are 63 people on the train now, that means there were 65 people to begin with.

You can solve this by the process of elimination, based on what each person says.

Let’s go through the information line by line.

[Line 7] Cheryl then tells Albert and Bernard separately the month and the day of her birthday respectively.

This is an important piece of information because it tells us that Albert knows the month, and Bernard knows the day.

[Line 8] Albert: I don’t know when Cheryl’s birthday is, but I know that Bernard doesn’t know too.

The second part is the clue. The fact that Albert claims that Bernard doesn’t know means it can’t be 18 or 19. Why?

If it were 19, then Bernard would know the exact birthday, as May is the only date with 19.

If Bernard was told the date was 18, he would also know that the birthday must be June 18, as that’s the only date with 18.

But how is Albert sure that Bernard didn’t hear 18 or 19?

It must be because Albert knows the birthday is not in May or June.

If Albert was told the month was May, he couldn’t be sure that Bernard wasn’t thinking of the number 19. Therefore, you can cross out May.

And if Albert was told the month of June, he couldn’t’ be sure if Bernard wasn’t thinking of the number 17. So June is also out.

In other words, Albert was told either July or August.

[Line 9] Bernard: At first I don’t know when Cheryl’s birthday is, but now I know.

Upon hearing Albert’s statement, Bernard now figures this out.

If Bernard was told the date was 14, it would still be ambiguous whether the month was July or August. So you can rule out he was not told 14.

[Line 10] Albert: Then I also know when Cheryl’s birthday is.

Therefore, the answer is July 16.

Let’s start by breaking the puzzle into bite-size pieces, one step at a time.

First, write the expression in the normal way you usually write mathematical expressions. This makes it easier to put in the numbers.

Next, let’s look at how many ways are there to put the numbers 1 to 9 in these 9 different boxes.

You can put 9 different numbers in the first box.

Applying this logic, you will have one less possibility for each box, until we get to the last box.

Now that’s a lot of possibilities to try and work by purely guessing and checking.

So let’s try working out the solution logically.

Remember the BEDMAS/BIDMAS/PEDMAS/PEMDAS rule you learnt in school?

To respect the order of operations, add parentheses or brackets to the equation. This means that multiplication or division comes before addition or subtraction.

Now it’s time to fill in some numbers to guess and check our assumptions.

What if you first used the numbers 1 to 9, from left to right?

What if you wrote the numbers in descending order, from 9 to 1?

That also gets you pretty close to the answer.

So how can you modify this expression to get to 66? The key is to look at the numbers and their positions.

In the next few steps, we used trial and error – testing and moving the numbers around until we got to 66.

Here’s one solution we got:

Now for the keen observers out there, you’d notice that you can switch the numbers that are being added, to generate another solution.

Similarly, you can switch the numbers that are multiplied, and it won’t affect the final answer.

This means anytime you come up with one way to solve it, you can generate a total of four ways – because multipclation and addition are commutative (it doesn’t what the order of the numbers are, the answer is the same).

In fact, there are multiple answers to this puzzle. 136 to be exact. How do we know?

Now, that’s a problem to solve for another time. 😉

The ‘trick’ to this question is that it requires no math(s) at all!

All you have to do is to look at it from a different perspective – literally.

Turn the question upside down, and you’ll see that it’s a simple number sequence, with the answer being 87.

Wait, what? But how?

To get there, you need to understand basic arithmetic and know that the area of a parallelogram and the area of a triangle are related.

The ‘secret’ is to identify triangles with areas that are half of the parallelogram.

To make solving this easier, you can start by labelling the unknown areas with letters a to f. And let the area of the red triangle be x.

Presh Talwalkar from Mind You Decisions, breaks down the solution in his video here.

The key is to remember that Helen and Ivan have the same number of coins.

Let’s look and compare the total number of coins for each type.

Ivan has 40 more 20-cent coins than Helen. For them to have the same number of coins, you have to ‘balance’ this out in terms of the 50-cent coins.

This means Helen must have 40 more of the 50-cent coins than Ivan.

Let’s now compare the amount of money of each coin type that Helen has, minus that of Ivan.

On the other hand, Helen has 40 more of the 50-cent coins than Ivan. So she will have:

Now, you can add this together to find out how much more or less money Helen has.

Therefore, Helen has $12 more than Ivan.

From the first part of the question, you can see that if you had Helen’s coins, you can ‘exchange’ 40 of the 50-cent coins for 40 of the 20-cent coins, that will be the total coins Ivan has. And you can get the weight difference from that.

Let’s compare the weight of Helen’s coins to Ivan’s coins.

You know the difference in weight between 50-cent and 20-cent coins is 2.7 grams. Therefore, you can substitute that in the equation.

So Helen’s weight of coins is 108 g more than Ivan.

To get Ivan’s weight, we take Helen’s coins and subtract by 108g.

Convert that to kilograms to get the answer, 1.026 kg.

How did you fare? Share this with your students or friends who love a great math(s) challenge!

Try the world’s leading online mathematics program trusted and used by over 200,000 educators. See your students’ improve with just 30 minutes of Mathletics a week.